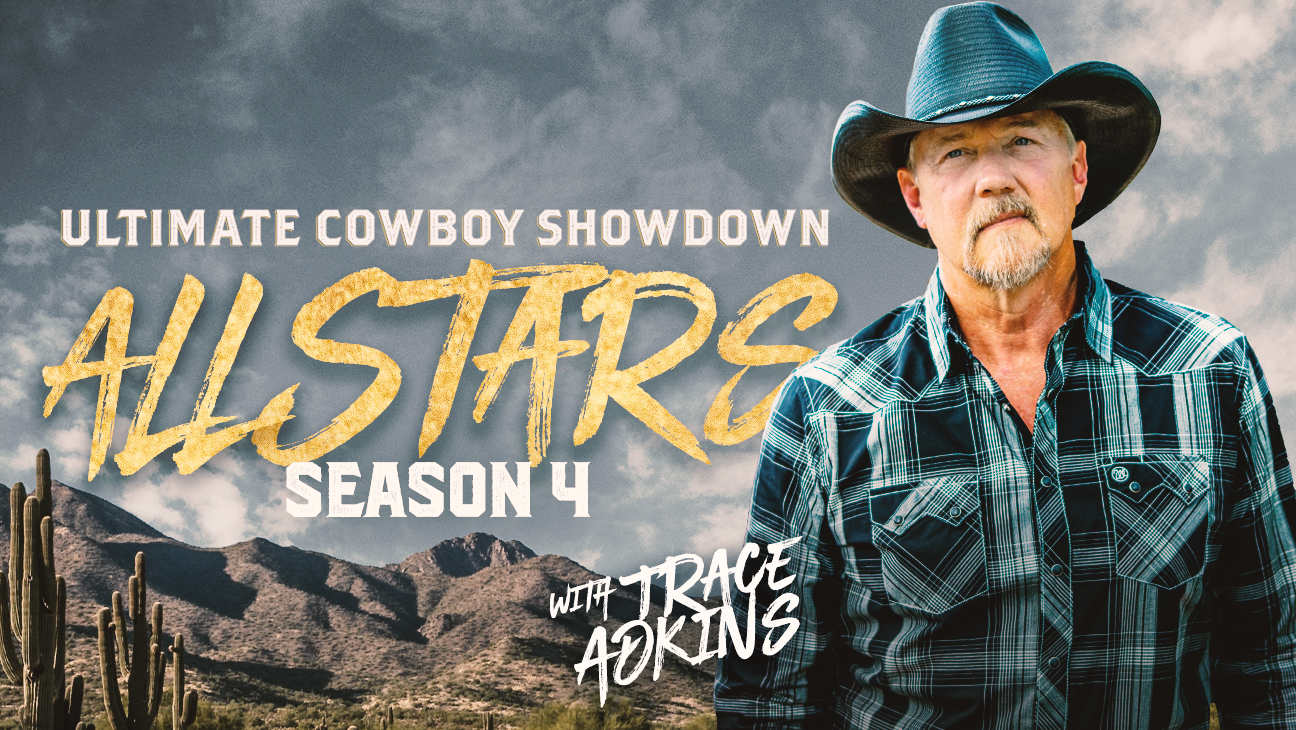 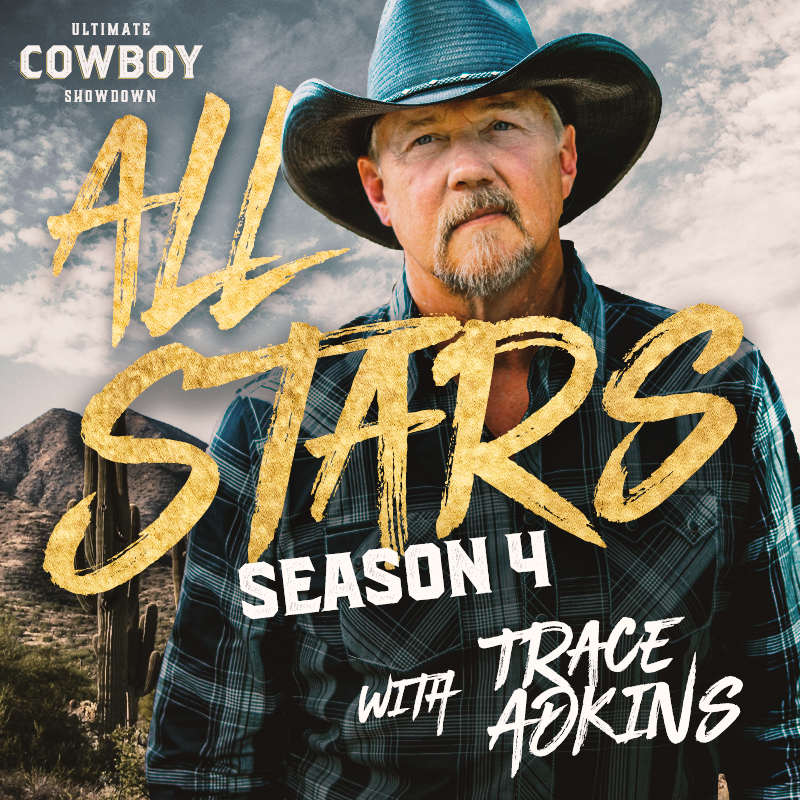 (Indian Land, SC – November 15, 2022) General-entertainment network INSP today announced it has greenlit a fourth season of its fan-favorite original cowboy competition series Ultimate Cowboy Showdown.  The new season, an all-stars edition, will see the return of Trace Adkins along with top contestants from the first three seasons. Doug Butts, Executive Vice President of Programming for INSP, made the announcement.

Ultimate Cowboy Showdown features a diverse group of cowboys from across the country competing for the ultimate cowboy prize – their own herd of cattle. Over the course of the season, the cowboy contestants participate in grueling individual and team challenges that put their skills to the test. One by one, cowboys who can’t or don’t perform are eliminated by a panel of judges that includes Trace Adkins and two event-specific experts. The last cowboy standing walks away with a prize package that includes the herd (worth at least $50,000); cattle & ranch related equipment; the coveted Ultimate Cowboy Showdown belt-buckle; and a lifetime of bragging rights.

Ultimate Cowboy Showdown All-Stars Edition, which will be shot in beautiful Arizona, will feature the best of the best from the past three seasons. “We believe these incredible all-stars should be given a second chance at being crowned the winner of Ultimate Cowboy Showdown,” said Butts. “However, season four promises to put their endurance and skills to the test. These veteran cowboys return with their big personalities and their best cowboy game in hopes of winning the grand prize! Each cowboy must display expertise and cowboy competency, but they cannot abandon the cowboy code. After each individual and team competition, Trace will render his decision.”

Butts continued “Ultimate Cowboy Showdown draws an audience that plays armchair judge; and they aren’t shy about letting us know if they agree or disagree with Trace’s decisions. Filled with fast-paced action, shifting weather, epic adventures, challenging Western landscapes and high drama, this all-stars edition will keep viewers locked in until a new winner is crowned!”

Trace Adkins will return as judge and jury, as well as host and executive producer. “It’s time to saddle up again,” said Adkins. “I’m looking forward to season four with these all-stars. We’re no strangers to each other; they know what I expect, and that I won’t accept anything less than their best. These folks are used to extreme competition, and I’m back to make sure they bring a high-level of intensity to this new season!”

The fourth season of Ultimate Cowboy Showdown begins production in January 2023 in Arizona. The full cast, and a premiere date will be announced soon.

Ultimate Cowboy Showdown is produced for INSP by Glassman Media.

Glassman Media is a Los Angeles-based international television production company whose credits include network primetime game, dating, docu-series and competition formats. Adaptations of Glassman Media original formats have been made in territories around the world. Glassman’s credits include NBC’s game show The Wall, produced in partnership with Lebron James’s SpringHill Entertainment. The Wall has been awarded International Format Best Studio Based Gameshow Format by c21 as well as Best Competition Game or Quiz Show by the Real Screen Awards. It has gone on to be produced in over 30 territories for more than 1000 hours. Glassman Media has produced several shows for INSP, including the currently running Ultimate Cowboy Showdown, hosted by Grammy nominated star, Trace Adkins, seven seasons of The Cowboy Way; and Turquoise Fever. Credits also include, FOX's Spin the Wheel, in partnership with Justin Timberlake's Tennman Productions, the NBC hit dating series Average Joe, whose first season finale attracted more than 25 million viewers ranking it as the second highest rated reality telecast in NBC network history; the critically-acclaimed Three Wishes (NBC) which was named the “most family friendly show on broadcast television,” and Battle of the Network Stars, a reboot of the infamous 1970's/80's competition show, which premiered on ABC; and Sweet Home Alabama on CMT, which became the network’s highest rated series. Glassman Media was founded by Andrew Glassman in 2001 following his career as an Emmy Award-winning investigative Broadcast journalist during which he appeared on-air at NBC News, CNBC, MSNBC, WCAU and WNBC. In 2019 Glassman Media was acquired by Endeavor, a global leader in the entertainment, sports, and fashion industry, and owners of the UFC and the WME Agency.

In his storied career in Country music, Trace Adkins has sold over 11 MILLION albums, charted 40 singles on Billboard’s Country Airplay Chart, earned numerous awards, multiple GRAMMY nominations, and garnered over TWO BILLION streams. A Grand Ole Opry member for nearly two decades, the Louisiana native is known for his dynamic baritone, fiery live performance, and notable roles as an actor in film and TV. Since his 1996 breakout debut DREAMIN’ OUT LOUD delivered smashes “Every Light In The House,” which hit Top 5 on Billboard’s Hot Country Songs chart and #1 “This Ain’t (No Thinkin’ Thing),” Adkins has pioneered a mix of classic Country minded traditionalism and adventurous, good-natured showmanship, breaking open new avenues in modern Country through fun-filled hits like “Honky Tonk Badonkadonk” and “Hillbilly Bone” with Blake Shelton. Celebrating the 25th anniversary of his debut with 2021’s release THE WAY I WANNA GO (Verge Records), the 25-song album has been applauded by Billboard as “a creative tour de force that serves up the lyrical and stylistic diversity that would make his hero [Ronnie] Milsap proud,” with Rolling Stone calling it “lighthearted club-ready fun…,” and PEOPLE praising it’s “packed to the hilt with hits.” From profound traditional balladry to clever-Country party anthems, the Mickey Jack Cones and Derek George produced project features special guests Blake Shelton, Luke Bryan, Melissa Etheridge, Pitbull, Snoop Dogg, Stevie Wonder on harmonica and more. With his headline THE WAY I WANNA GO TOUR extending into 2023, Adkins is now starring in FOX’s new Country music drama series, MONARCH.